A while ago I needed to orchestrate a much more complex build flow in Jenkins. Besides the normal build, which includes unit testing, there was a need to test performance, performance static analysis on the code and well as execute a full functional test run. The problem was that most of these things took hours to complete. As the start of this, a full functional test run, if done sequentially, took 60 hours. Luckily it was possible to partition the testing so that it could be run in parallel.

What was required is to create a flow that looked similar to below. 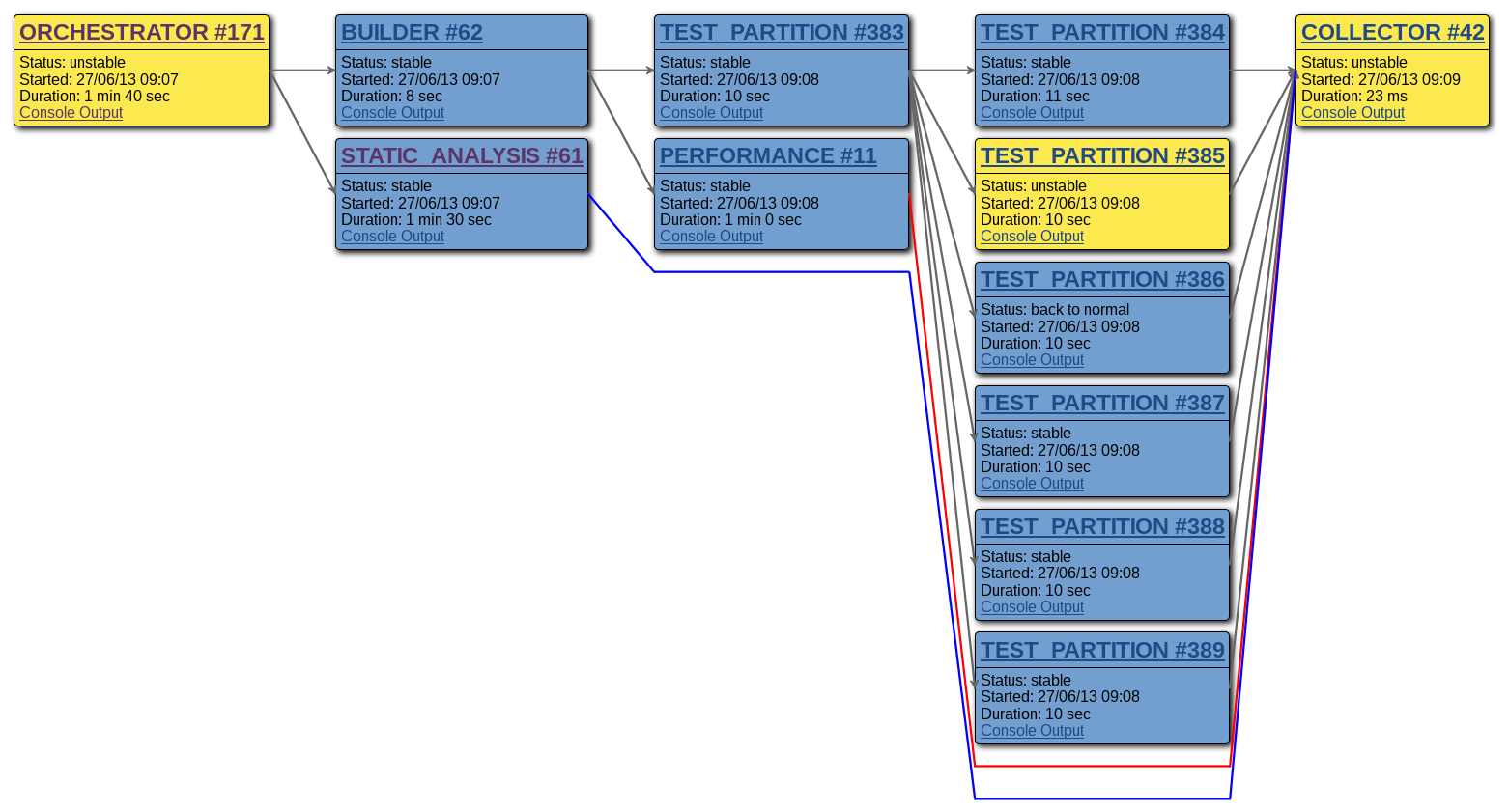 This is achieved via the Cloudbees Build Flow Plugin, which is free and open-source. The source code is on Github. I am not going to explain more about the basics of the plugin, that can be read for itself on the plugin wiki page. There is enough there to get someone started. However, when you want to achieve the above kind of flow you'll need to know a bit more.

The DSL is Groovy-based, so knowing the basics of the languages and especially Closure syntax is required.  The flow itself is controlled via the FlowDSL class. Furthermore calling build returns a JobInvocation instance and dependant on how parallel is called, it will either return a list or a map containing FlowState instances. The build results are actually stored in a Run instance which, after obtaining a JobInvocation instance is available via .build property-syntax. Knowing this difference is important as it will help you to extract build information later on.

The following code snippet illustrates how to create a build flow similar to the graphic depiction.


Define as much as possible as closures

This will delay execution until such time that is required. This is what parallel relies on too. buildFlow, staticAnalysisFlow and performanceFLow are examples.


Capturing build results within the closure

Notice how buildFlow will store results in buildResult. (The latter will become a JobInvocation instance after execution)

It is relatively easy to execute multiple instances in parallel, each running with different parameters. This can be done with a simple Groovy Range and using the collect operation. parallel requires a list of closures to be passed to it, collect does that for you See how testFlow is defined above. We have even wrapped each build inside and ignore closure, so that unstable builds don't break the build pipeline.

Stringing lots of flow sections together, can be tricky to follow. In such cases break down the flows into smaller manageable sections. As staticAnalysisFlow took a very long time to complete, I wanted it to run parallel to everything else. I have therefore created a mainFlow to run alongside. In order to deal with the complexity of running performanceFlow in parallel with another flow which already has more parallel flows in it, I have broken it down into smaller flows, which are then strung back together. Strictly speaking the use of arrays and each are not necessarily, but when you have even for jobs involved, this style can sometimes be easier to read.

For all of the aprtitioned test runs, I wanted to collect the build numbers so that it could be passed downstream. As mentioned earlier parallel returns a FlowState instance. It is a simple case of iterating through all of the builds and finding the lastBuild property which will give you a JobInvocation to work with.

Once all of the builds have completed, the necessary information can be passed do a final downstream job, which in turn can aggragate information form all of the other jobs.


For me one of the drawbacks of the current implementation is the lack of Grape support. Sometimes one needs just a bit more decision-making capability than what stock Groovy will offer you. It would be helpful to be able to use @Grab to pull in some extra libraries.

It is also not possible to version the build flow script. It could definitely be useful to store it in source control and then update it before each run.  The best workaround for now is to either


Even given the above mentioned limitations, the Build Flow Plugin is a powerful item in the quiver of any Jenkins crew. I hope that this article will help other towards some more complex real world orchestrations.