Dale Emery has posted a great set of slides. I would recommend this to all software developers, testers, business analysts and everyone in the software management food chain to read. 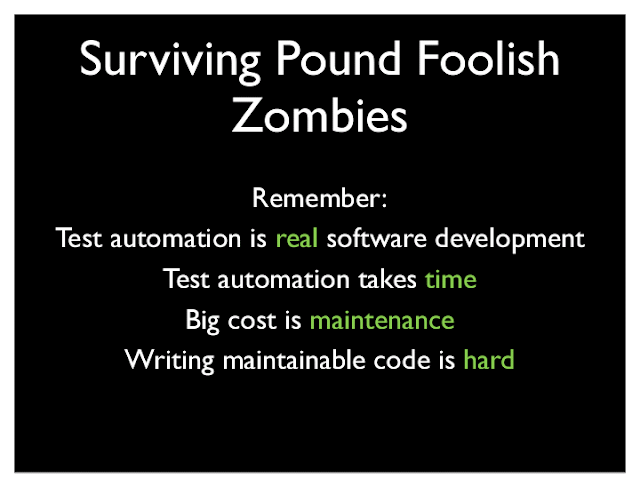 This has reminded ne of a conversation with a tester not too long ago. I was doing some work with him on their test system. We pair-programmed the change - it was his first experience in pairing. It was the also only way we could achieve this tricky modification. The system has grown into a big code base. It was not well documented, apart from some Word documents that were not up to date. There was also a number of methods that mostly did the same thing.

I explained to him that the test system itself should be modular and unit-tested. His jaw dropped: "We should have tests for our tests?". "Indeed", I replied, "you are using this to functionally test the product as if it is installed in a live environment. You need to have the confidence that changes you make will not adversely affect the results."

The same applies for your deployment code. The DevOps movement tells us that infrastructure is code. Not only do you need to look after your production code and test code, you also need to look after your deployment code with the same zeal. It is hard to do, it requires discipline, but that discipline is what is going to allow you to relax on the weekend, instead of fighting fires in the office. I would call that prosperity:
Agile teams - Prosperity Focused, Values-driven from Schalk Cronjé

I have recently heard of a team that used to work to the mantra of building walking skeletons first, including building the skeleton deployment code first.  Of late, they have been told to manually deploy because THERE_IS_NO_TIME_FOR_WRITING_AUTO_DEPLOYMENT code. Now that is just wrong. It is a mutation of Dale's Automation Last Zombie (see slide #12 of Dale's deck).  We can even call it the Deployment Last Zombie. I am sure that team will pay for this short-term thinking pressed upon them.

Just as test-driven development has done a lot for design and testability we really need Deployment-driven development. Dare I call it DDD? Preferably not, there are too many buzz acronyms around already. Regardless of what we call it, this is what DevOps and the next level of effective software development brings to the table.

Just remember, treat your test automation code and your deployment code with the same respect that you treat your production code with.